The world’s rich and famous traveled to and from Jeffrey Epstein’s island in the Atlantic for years.  Today the AG for the US Virgin Islands demanded the logs on all flights to and from the island for the past few decades.

The Mirror.co.uk is reporting tonight:

The Attorney General for the US Virgin Islands, where Epstein had a home, has demanded logs for his four helicopters and three planes, from 1998 to his suicide last year.

Logs for every flight made by Jeffrey Epstein’s aircraft over 21 years have been subpoenaed, “sparking panic” among his rich and famous pals.

The Attorney General for the US Virgin Islands, where Epstein had a home, has demanded logs for his four helicopters and three planes, from 1998 to his suicide last year.

As well as the passenger lists, Ms George is seeking any “complaints or reports of potentially suspicious conduct” and any personal notes the pilots made.

The subpoena demands the names and contact details of anyone who worked for the pilots or who “interacted with or observed” Jeffrey Epstein or any passengers associated with him.

DEVELOPING: All Passengers on Epstein’s Flight Logs to Be Named – Epstein’s Rich and Famous Pals Panicking

I went though and scroll through my google hangouts conversation with this scammer. these are the pictures she used

News broke on July 17 that a war memorial honouring Ukrainian Nazis who served with the German SS recently had the phrase “Nazi war memorial” painted on it. These Nazis were part of the openly fascist Organization of Ukrainian Nationalists, in the 14th Volunteer Waffen-SS Grenadier Division (the Galicia Division). The Wiesenthal Center’s Canadian representative, Sol Littman, explained that this SS division largely comprised Ukrainians who served with Nazi police battalions and death squads.

They committed many massacres and crimes against humanity, including the Huta Pieniacka murder of 850 to 900 citizens of Polish descent. The Halton Regional Police were originally investigating the incident as a “hate crime,” but were forced to change the description of the incident to “vandalism.”

Ukranian Nazi collaborators: From working for the Nazis, to crushing the insurgent Canadian left in the 1950s

The Organization of Ukrainian Nationalists was founded in 1929. Its fascist and openly anti-Semitic ideology was that Jews and Russian-speaking citizens must be removed from Ukrainian society at any cost. They enthusiastically collaborated with Nazi Germany in the 1940s to exterminate Jews, Russians, and anyone who attempted to protect them. The OUN was only forced out of Ukraine after the USSR took control of the country, upon the end of the Second World War.

The Ukrainian fascists found new homes in Canada, where the ideology of anti-communism was extremely potent. Peter Vronsky, a former documentary Director at the National Film board revealed that:

“a little known US-financed group in Canada called the “Canadian Christian Council for the Resettlement of Refugees” privately lobbied the Canadian government in the 1950s to admit former Nazi Waffen-SS ‘foreign legion volunteers’ like the Moslem Bosnian-Albanian Nazi SS troopers, Ukrainian SS volunteers, and others, to come to Sudbury wholesale to work in the mines.”

The Jewish News of North California reported that the Canadian government admitted more than 2,000 Ukrainian members of the Nazi 14th SS Division in the 1950s. This was done to crush the burgeoning leftist Ukrainian diaspora that was building up during the previous few years.

One way of getting into postwar Canada “was by showing the SS tattoo,” Canadian historian Irving Abella told 60 Minutes interviewer Mike Wallace in 1997. “This proved that you were an anti-Communist.”

Canada knowingly failed to report them to Germany, resulting in many of the 1,882 recipients of the German “victim pensions” being Ukranian Nazis living in Canada.  Many former Nazis, including suspected war criminals such as Radislav Grujicic, were paid by the RCMP to provide intelligence reports on left-wing immigrants who had recently came to Canada, reported the CBC in 1996.

In 1995, a Toronto Star article exposed that a Canadian mining company, INCO, utilised Ukrainian Nazi collaborators to crush leftist labour organizing in the early 1960s. As a whole, they were crucial in shaping the anti-leftist lean of Canadian unions, resulting in the current centrist and right-wing unions which are being crushed by the bosses today.

Ukrainian-Canadian nationalism: A proud tradition of whitewashing Ukrainian collaboration with the Nazis to this day

In the present day, the Oakville memorial to the Nazi SS Galicia Divison is far from the only memorial honouring Ukrainian Nazi collaborators in Canada. In 2010, the Canadian government authorized a memorial to the “victims of communism” after an aggressive campaign from Tribute to Liberty. This group minimizes Nazi war crimes, in favour of targeting the Soviet Union, which lost 25 million citizens in the fight against fascism, during World War II. The Liberals have continued to support it, even after public outcry forced the monument to be downsized and moved out of its spot near the Supreme Court of Canada.

The “victims of communism” memorial is based on an incompetently sourced database, which even considered Nazis as victims. This concept relies on The Black Book of Communism, which counts Nazi–collaborating fascists, anti-Semitic White Army fighters and czarist officers who oversaw genocidal pogroms against Jews in its list of “victims of communism.” Contributors to the book admitted that the book’s editor Stephane Courtois fabricated the numbers to arrive at the much parroted 100 million figure. It also minimizes the horrific crimes of fascism, ignores the deaths under the capitalist economic system, while portraying communism as the greatest threat.

The memorial’s farcical justification is symbolic of the glorification of Ukranian Nazi collaborators in modern day Canada.

Freeland is also deeply connected with the Ukrainian Canadian Congress (UCC) and the League of Ukranian Canadians (LUC), which glorify the fascist Union of Ukranian Nationals group and Ukranian Nazi collaborators. The UCC considers the fascist nazi collaborator Stepan Bandera, the fascist political and military leader of the Bandera faction of the Organisation of Ukrainian Nationalists, OUN, as one of Ukraine’s greatest national heroes. They both honour Yaroslav Stetsko, Bandera’s right-hand man, who stated in his 1941 autobiography:

“I therefore support the destruction of the Jews and the expedience of bringing German methods of exterminating Jewry to Ukraine, barring their assimilation and the like.”

The group’s youth division often marches with portraits of Bandera and Stetsko, while posing for photos with Bandera’s portrait in back. On the 100th birthday of Bandera, the UCC’s youth group even participated in a ceremony, in which they performed patriot Ukrainian songs to honour him.

Freeland has followed the UCC line on Bandera, describing him as a “western Ukrainian partisan leader … who led a guerrilla war against the Nazis and the Soviets.

She has repeatedly marched with the youth groups which venerate Bandera, supporting the indoctrination which makes a martyr out of Bandera.

In 2014 and 2016, Freeland marched in and promoted Toronto’s Ukrainian Festival included which fundraising efforts by Right Sector Canada, a neo-nazi group.  Their goal was to purchase military equipment for their fighters in Ukraine.  The Right Sector glorifies Stepan Bandera, and wants to “build a nationalist Ukrainian state and stage a nationalist revolution”.

In 2017, it was exposed that Freeland’s maternal grandfather — Michael Chomiak — was a fascist propagandist. Freeland claimed that this was “Russian disinformation”, but the truth had been exposed for all to see. Chomiak ran Krakow News, a Ukrainian-language newspaper, out of Nazi occupied Krakow, Poland. The paper praised Hitler, ran giant ads for Ukrainian SS recruitment, and spread antisemitic propaganda which justified the slaughter of Jews, Poles and Russians. Chomiak had multiple safe opportunities to escape the Nazis, yet chose to stay at every opportunity.

Chomiak’s Nazi collaboration was exposed by a small academic journal in the 1990s, yet Freeland continued to praise and idolise Chomiak for decades. Even after becoming an MP for the Toronto-Centre riding in a 2013 by-election, Freeland continued to praise the Nazi collaborator. Trudeau lobbied Freeland to run for the Liberals in the by-election, and has failed to challenge her support for Ukranian neo-Nazis ever since she was elected.

In 2016, Freeland tweeted this on Black Ribbon Day, which commemorates victims of both Stalinism and Nazism:  “Thinking of my grandparents Mykhailo & Aleksandra Chomiak on Black Ribbon Day. They were forever grateful to Canada for giving them refuge and they worked hard to return freedom and democracy to Ukraine. I am proud to honour their memory today.”

Given her close ties to Ukrainian nationalists and neo-nazis, it is far from surprising that this support would lead to her using the position of power as foreign minister to actively support Ukrainian neo-Nazi militias, including the Azov Battalion.

The Azov Battalion was formed out of the neo-Nazi gang Patriot of Ukraine. Azov’s original commander, Andriy Biletsky stated that Ukraine’s mission should be to “lead the White Races of the world in a final crusade…against the Semite-led Untermenschen.”

Multiple Western outlets have confirmed that the militia is a neo-nazi one: The New York Times called the battalion “openly neo-Nazi,” while USA Today, The Daily Beast, The Telegraph, and Haaretz documented group members’ proclivity for swastikas, salutes, and other Nazi symbols, and individual fighters have also acknowledged being neo-Nazis. The unit has recruited neo-Nazis from Germany, the UK, Brazil, Sweden, and America.

In June 2014, Ukraine formally integrated extremist far-right militias including the Aidar, Dnipro, Donbass, and Azov battalions into the National Guard, which is led by Ministry of Internal Affairs.

These militias have also been accused of committing war crimes on multiple occasions, while in spring 2018, a lethal wave of anti-Roma pogroms swept through Ukraine, with at least six attacks in two months. The C14 and the National Druzhina,  the two gangs behind the the attacks, proudly posted pogrom videos on social media. National Druzhina is a part of the Azov Battalion.

These groups, and even the Ukranian National Police leadership share the UCC and LUC’s reverence for Stepan Bandera, a Ukrainian Nazi collaborator and OUN leader.

In 2015, the Stephen Harper government initiated Operation UNIFIER, a program which saw the Canadian Armed Forces supply the Ukrainian military and paramilitary police units with training and weapons. Freeland never condemned the effective funding of Ukrainian neo-Nazi militias, refused to cancel the program, and proceeded to extend the UNIFIER program until 2022.

While there have been limited attempts by multiple countries to prevent weapons from reaching the militias, the Daily Beast reported that these efforts have miserably failed.

Volodymyr Zelensky, who made reaching peace with Russia a major part of his platform, was elected as Ukraine’s new President in April 2019. The neo-Nazi militias have accused Zelensky of “treason” against the Ukrainian state, while actively blocking demilitarization efforts led by the Ukrainian military. In October 2019, the Azov Battalion even replaced soldiers who were withdrawing from the Zolote region.

It is clear that these neo-Nazis hold tremendous power in Ukraine, which they hope to use to eventually use to take control of Ukraine, and based on the statements of neo-Nazi militia leaders, commit genocide against Jews, the Roma population and other minorities in the country. It is an utter disgrace that two major Ukrainian-Canadian groups, and Deputy Prime Minster Freeland continue to support funding these neo-Nazi militias, risking the rise of a new fascist state in Europe. 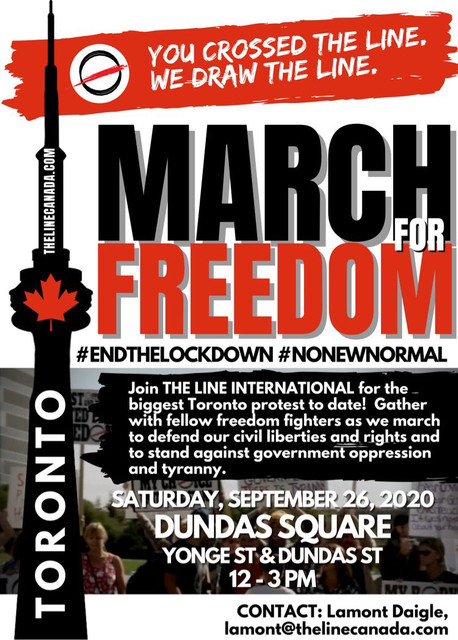 Prime Minister Justin Trudeau and Gov. Gen. Julie Payette are headed for what could be an uncomfortable public moment on Wednesday, when Payette delivers the speech from the throne while her office is under a cloud of controversy due to harassment claims.

The Governor General is always the centre of attention when a throne speech is presented — but never before like this.

Earlier this month, the Privy Council Office confirmed it had hired a private company to conduct a probe into claims of a toxic work environment and verbal harassment at Rideau Hall. The probe was triggered by a CBC News story detailing reports of mistreatment.