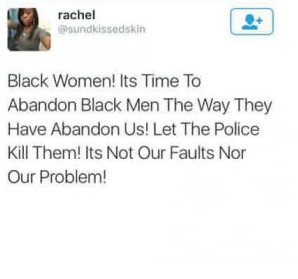 The above Facebook and Twitter posts are around 4 years old, this is what black women were saying back in 2015-2016 and even before this time, therefore in light of the recent killing of George Floyd by Minneapolis police officer Derek Chauvin, can we really be surprised at black women and their “we refuse to march for Floyd stance”?

Mind you, these black witches above weren’t even dealing with black men who were killed being in relationships with non black women, they were speaking about black men in general who are unfortunate to be accosted and in some cases shot by the police. At this stage all I can figure is that black women have induced many black men with some of the heaviest witchcraft and darkest spells of sorcery in order to prevent black men from awakening, rising up and cancelling black women permanently.