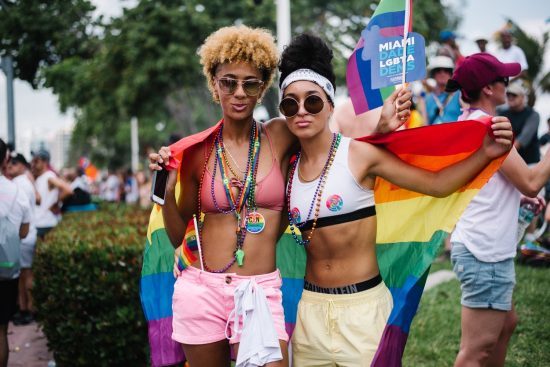 Black women are experts and professionals when it comes down to fulfilling negative stereotypes, so you have two black females twerking with a rat in a local neighbourHOOD in NYC celebrating Pride month, smh. Yet these same women would become upset if we called them hood rats. Again, you’ll notice that this is how most black women typically advertise themselves, as sex machines always ready for service.

Black women as a collective at the end of the day know that they have very few if any quality female traits and so in order to draw men in will resort to triggering the base instinct of sex. However as we all know sex is not the be all and end all of a relationship, there must be more in place outside of sex otherwise the relationship is guaranteed to fail.

Again, note the black female’s desperate nature in trying her…

He packed two handguns, ammunition and a combat knife into a laptop case and drove to McDonald’s for what he thought would be his last meal: Hotcakes, a cheese McMuffin and a Coke.

Then, filled with fury, Haq began his three-and-a-half-hour drive to Seattle from central Washington to open fire on the Jewish Federation of Greater Seattle, where later that day he shot six women, leaving one dead and five seriously injured, including one who was 17 weeks pregnant.

He was convicted of murder, attempted murder and a hate crime. Now 11 years into his imprisonment, Haq is the new imam for the Airway Heights Correctional Main Facility in Airway Heights, Wash. In his new role, he’s trying to lead by example in conveying remorse to those he hurt.

“I have to make some right out of my terrible wrongs,” Haq said via email after an in-person visit from Religion News Service. “I have deep regrets for killing and maiming innocent people. I will spend the rest of my life trying to rectify my misdeed as much as possible.”

Despite a no-contact order that prevents Haq from contacting his victims, he wrote eight “accountability letters” to his victims last year. Over 37 pages, he apologized to individual victims and to the Jewish Federation of Greater Seattle. Victims can be notified when an inmate leaves a letter, according to the prison system’s victim services program. None of Haq’s victims have asked to be notified, however, and none have asked to read the letters he’s submitted.

“To really make amends I have to be innovative,” he said. “For me, it is the right thing to do.”

Shooting victim Cheryl Stumbo declined to comment. Others either could not be located or did not respond. The Jewish Federation of Greater Seattle did not respond to RNS queries.

Forgiveness might not be forthcoming. Rabbi Joshua Stanton, founding co-editor of the Journal of Interreligious Studies and rabbi at East End Temple in Manhattan, said when it comes to forgiveness, Judaism focuses on actions rather than words.